In Honor of International Women’s Day and all the Fierce Women in my life. 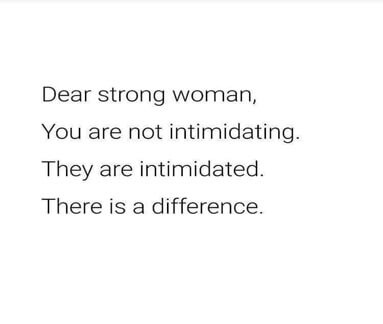 I am grieved deeply by how many women attempt to become small; I see the way you try your hardest to become less than. Less attractive, less brilliant, less strong, trying your damnedest to become something or someone other than who you are, all for the sake of insecure men. I wonder how many of you have been swayed to dim your glory and shun your goodness because of a man’s insecurity? I am sure I could collect a library of heartbreaking stories from women around the globe with these same words, “I have compromised my strength because I wanted to be loved by an insecure man.”

Why men are given this much power in the first place?

First, misogyny and patriarchy are as American as pick-up trucks, football, and George Washington. (Just to be clear, I have no idea if old George was indeed a misogynist.) We have been marinating in the cultural oppression of women our entire lives.

For me, this played out quite visibly in the churches I attended growing up. Women were just a little bit less-than; they could lead prayer groups, manage the nursery, teach Sunday school, direct the choir, and give their testimonies– just not preach on Sunday morning. Jesus, well, he loved them, but they were still under their husbands’ covering. (I write more about this here.) The sexism was often covert; if you weren’t looking for it, you couldn’t quite see it clearly. The problem with the sexism being nearly imperceptible was that it became the air we breathed. Many men internalized this white-washed sexism and became entitled and privileged, while the women in turn became self-annihilating. They absorbed the social pressure to become small and to allow space for men to arise. This dynamic, which is still at work in our society today, creates a misalignment in the power balance and paves the way for male perpetrated violence against women. Anti-sexist activist and educator Jackson Katz says that so-called “gender violence issues” are largely men’s issues, and that men need to work, together with women, to “break the silence in male culture about the ongoing tragedy of men’s violence against women and children.”

The second reason many women give away their power away is that they are living out of their own unaddressed wounding. What is your story with the masculine? What unaddressed wounds are causing you to become comfortable with being small and giving away your power? Is it your own father’s violence, or his passivity? Perhaps you are scarred by his seduction, him choosing to delight in you over your mother?  What about your abusive high school boyfriend? Or that time you were violated by the neighborhood creep?

Why do men do this?

As a recovering insecure, abusive man, I have historically manipulated women to escape my own heartache and discomfort with my inner darkness. If I could compartmentalize my pain elsewhere and make my problems about her, then I could let myself off the hook. My insecurities unconsciously influenced much of my abusive behavior. I truly believe in the core goodness of men, yet the fact remains that many men who attempt to tear women down will not change and will not become safe men. If, and only if, these men are willing to go through the painful process of “dying to self”, then they will be able to transform into safe men who are capable of honor, love, and equality in authentic relationships.

How do you own your goodness?

Many women who find themselves in abusive or unhealthy relationships have a twisted view of self. They have embraced the sexism that has been handed to them, and thus turned against their own goodness. Gen. 1:31 says, “God saw all that He had made, and it was very good.”

You are good, you deserve to be treated in a manner as good as you are.

I discuss this concept in my book Stumbling Toward Wholeness:

Assent to ourselves is not some humanistic, narcissistic plea to make God in our own image. Quite the contrary. This affirmation of the goodness of self simply takes seriously the fact that God has created us in his likeness. To live into who we are meant to be in God’s family, we must wholeheartedly embrace the radical truth that we are image bearers of the divine, beloved by the God who created us.

When we recall that we are created in the divine image and that God looked on us and called us very good, we begin to realize the self-contempt that so often gets sanctified in our faith communities is actually a prideful stance: We unconsciously think that our self-hatred can cleanse us, that we can sit in God’s place and forgive our own sin. We become consumed with self by unconsciously cutting ourselves down, sabotaging our own success, and isolating ourselves from life-giving relationships.”

Have the courage to own your goodness and strength.

Do not let anyone other than God name you.

You are not too much.